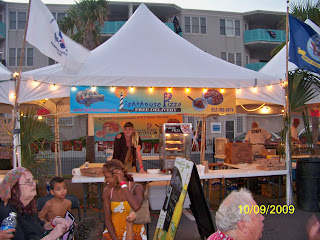 What a party! The 2009 Pirate's Fest was spectacular. We don't know how many people turned out for the festival, but the crowds were huge and they ate a lot of pizza! 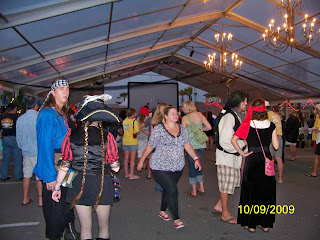 First, the setting. It was warmer than usual for this time of year, about 90 degrees, but felt great. The weather stayed great except a brief downpour Saturday that, unfortunately, drenched the parade and parade-goers, but even that didn't stop the fun. The arrangements were wonderful -- congrats to the Pirate Fest committee for the setup. At one end of the South Beach parking lot was a huge, huge tent, complete with chandeliers, that covered the stage and plenty of space for attendees to enjoy the concerts, which went on Friday evening and Saturday evening, ending with a great performance by the Marshall Tucker Band. Rows of matching tents stretched along either side of the parking lot, housing all the vendors and creating a kind of carnival midway in between.
The food vendors were on the street side of the parking lot, which was a good thing, because it made it easier for staff to bring refills of hot, fresh, pizza to our booth -- which happened about every 15-20 minutes. It seemed we couldn't keep up with all the hungry pirates, big and small. From what we could see, the other food booths -- all local Tybee businesses and organizations -- were kept busy, too. And the other vendors, with pirate costumes, jewelry and other pirate related items, had lots of customers, as well.
The crowd was a wonderful mix, from locals, often with children, out for a day of fun to serious pirate fans who travel to events all over the country. Some of our out of state customers had planned their trips to include Pirate Fest, others were pleasantly surprised when they found out about it. And the costumes! Everything from off-the-shelf kids Halloween costumes to improvised to elaborately recreated outfits. We saw several people with stuffed parrots attached to their shoulders, so were quite surprised when a very realistic one started moving. No wonder it looked so real, it was!
We'll look forward to an even bigger and better Pirate's Fest next year!
Posted by Lighthouse Pizza at 9:57 AM